Getting to Know the Bryophytes

Bryophytes refer to non-vascular plants; these are the tiny green organisms which fill in the cracks in scenes dominated by their vascular cousins. The most familiar of these is moss, which in its various forms can be found in virtually every habitat on earth. Mosses also constitute the overwhelming majority of bryoflora in Colorado; I look briefly at other categories, but this post is essentially going to be about moss. The alligator-skinned liverworts constitute another lineage, with the least common (at least in CO) hornworts bringing up the rear. These plants are fascinating because they are ancient, virtually indestructible, and at the proper level of magnification they are beautiful. Rather than diving in to any particular species or even the broad distinctions between different groups, I want this post to look at the bryophytes on their virtues as a group writ large. All photos in this post are best viewed in their enlarged formats, so click away! 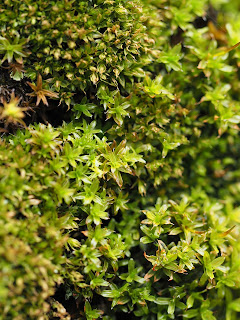 A north-facing granite boulder in Deer Creek Canyon Park yielded this image
just after a major spring snow storm. Mosses like these are suprisingly
prevalent in Colorado's dry, dry climate.

Bryophytes (not) in Culture


At risk of belaboring something I often write, I must reaffirm that the bryophytes are truly an oft-overlooked set of plants. Liverworts and hornworts are seldom seen and likely not differentiated in common culture, but surely something as ubiquitous as moss would have stirred something in the human creative spirit. However, the humble mosses are not mentioned the Bible, the Qu'ran, the Bhagavad Gita, the Hymns of Rig Veda, the Tao Te Ching, or the Enuma Elish(1). The few attempts to illuminate the world of bryophyte ethnobotany invariably begin with some hurt-sounding statement about how the subject has been grossly under-examined, likely due to bryophytes' limited economic significance(2). William Shakespeare mentions moss but once (that I was able to find), growing in the company of "baleful mistletoe" on "forlorn and lean" trees where "never shines the sun."(3) I don't think it's fair to say that moss, and by extension other bryophytes, are a particularly maligned group of plants based on Shakespeare's brief negative attention alone. I do think that it is fair to say that for something so commonplace they receive precious little attention*.

*the exception to this, as with many things, is Japan. To read an exploration of Japan's curious cultural infatuation with moss, click here. A Japanese book which depicts the smiling, anthropomorphized sex organs (archegonia) of a liverwort may be found here. 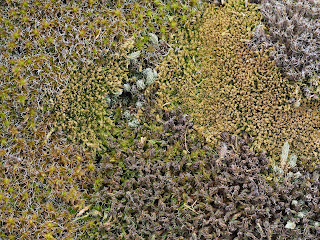 Another boulder face tessellated with mosses. There are at least three four species of moss here,
with one club moss (the teal spikes top center and far right) putting
in an appearance for good measure.


The "bryophytes" as a group are strange and interesting. I use quotation marks because from an evolutionary perspective the different plants in this group are more defined by what they are not (vascular plants) than what they are, although they do share many traits in common(4). Rather, a more complete grouping would have each of mosses, liverworts, and hornworts as three separate branches on the tree of life, with the entire mass of vascular plants constituting the fourth branch as seen in the following figure (click to enlarge): 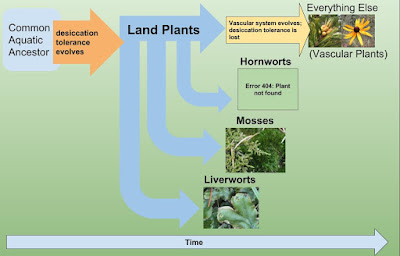 Note that there is no picture for hornworts: in keeping with my attempt to only use original images, I simply haven't found one to photograph. This is hardly surprising as there are only 2 species of hornwort reported in Colorado: one is restricted to one known site which is overgrown with poison ivy near Boulder, the other's location was likely destroyed by development in Alamosa(5). Some pictures of hornworts may be found here if there is interest. Also a disclaimer: many vascular plants redeveloped desiccation tolerance for  their seeds, which is why we don't store garden seeds wet. A very small minority of vascular plants, such as the resurrection fern, also have this capacity.


Within their paraphylytic group the bryophytes present a common front when it comes to some remarkable features: 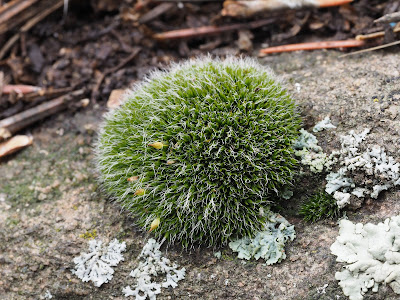 The xeric moss Coscinodon calyptratus also loves granite boulders in the mountains, but favors those
on blasted, sun-baked faces. Much of the time this moss simply looks black and dead,
but a rainstorm quickly restores it to its green, fuzzy self. 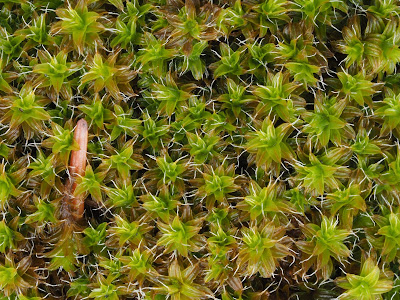 Syntrichia ruralis (a.k.a. Tortula ruralis) growing at Mount Falcon Park near Denver. Note the Douglas Fir needle for scale. S. ruralis is a fun moss to discover in the field because it is one of the relatively few mosses that are
easily identified without the benefit of a microscope. It is also one of the most extensively studied
mosses where desiccation tolerance research is concerned. 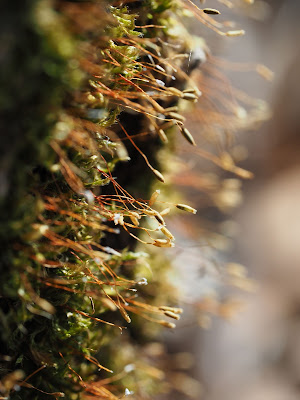 The sporophyte generation of an unidentified moss growing epiphytically on Gamble oak near a creek. The sporophyte
is the diploid generation of the bryophyte lifecycle, which in turn performs meiosis to create haploid spores which can
mature into full-grown gametophytes (i.e. moss). Most texts on bryophytes stress that the sporophyte isn't some sort of "seed phase," but a living generation of life in its own right, albeit one heavily dependent on its supporting gametophyte for its needs. In one text (6) the contributing authors even go so far as to speak of  types of "privilege" in the botanical thinking around the dominance of gametophyte vs. sporophyte life stages in plants; apparently the language from the more advocacy-centered humanities (i.e. women's studies, racial studies, etc.) has finally percolated all the way into the labs of people who think mosses are more interesting than anything else. Once papers on socioeconomic inequality are published with reference to metaphorical societal "meristems" we will know that academia has come full circle. 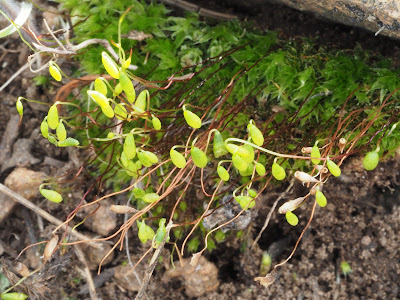 Another moss, also unidentified, growing between soil and stone in the foothills near Denver. These green sporophytes are not yet mature, and their relationship to the parent gametophyte is more visible: the pigmented setas (sporophyte stems) hold the sporophytes aloft to better distribute spores while acting as an umbilicus to the parent organism. 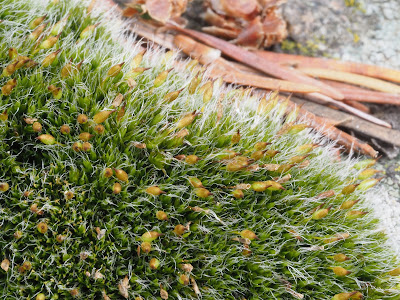 Coscinodon calyptratus' sporophytes. Each sporophyte has a calyptra, or cap, which performs different functions in regulating spore dispersal in different species of mosses. These calyptrae are considered to be "mitrate" (miter-shaped: between the sanctity of gametophytic cells in mosses and now these caps, one begins to suspect that bryoflora have Papist leanings), which biologically speaking means that the calyptra is not divided by a longitudinal line as many are many other calyptrae. It is also one of the features which makes this moss fairly easy to identify in the field. 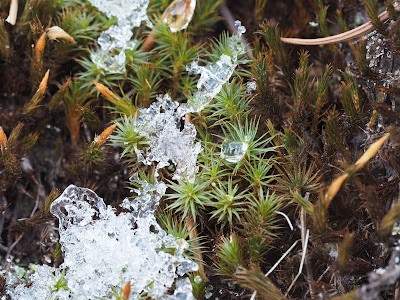 A Polytrichum moss (species unknown) growing on a north-facing embankment in Deer Creek Canyon Park. The brown, bristly stocks to right and left are actually perfectly healthy, desiccated plants. The hydrated shoots at center are cheerfully photosynthesizing and likely even growing as the cover of melting ice provides hydration. Cold tolerance is another adaptive feature of  many bryophytes that allows many to grow in otherwise hostile conditions. Cold tolerance likely employs many of the same mechanisms for cellular defense and repair which allows for desiccation tolerance (8). 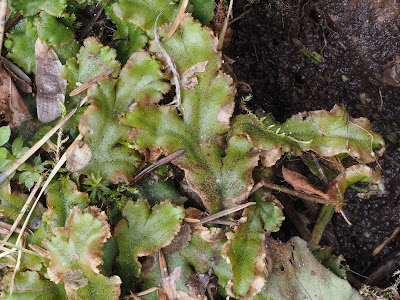 An unidentified liverwort growing in a stream bed in the foothills near Denver. This much smaller phylum of plants may actually have more cultural notoriety than the much-ignored mosses, at least historically, due to a belief that liverworts would cure ailments of the liver. They are even to this day known as the "hepatics," and likely both the term and the belief in medicinal value stem from its oddly liver-like appearance. I noted this bed of liverworts first in the dead of winter, when despite their fleshy appearance they were obviously not adversely affected by the cold. 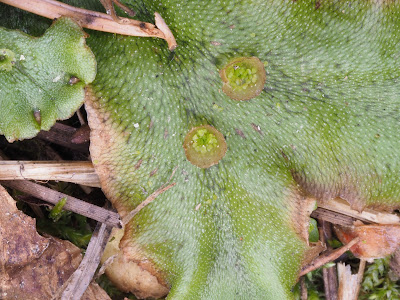 A close-up of the same liverwort. The cups in this picture are splash cups filled with assexual propagules called gemmae. I love how alien-looking the texture of this plant's thallus is. It is also interesting to note that the splash cups are a great example of convergent evolution, wherein morphologically similar structures have formed in organisms of similar size and habitat such as the lichen Cladonia pyxidata, even though in terms of evolution these organisms are leagues apart.

Bryophytes and Evolution: How Mosses are not Longing to be Trees

One thing I found interesting in reading up on bryophytes generally is how they illuminate a common misconception about evolution: the idea that natural selection will always generate a steady increase in complexity with beings such as ourselves situated at its apex. This is an idea I encountered in the meat-and-potatoes bryology literature (6), as well as a critique that is made more eloquently than most by the inestimable Stephen Jay Gould. At risk of making an already long post much longer; the essence of the problem may be summarized in that classical era notions of heirarchy  found their way via neoclassicism into enlightenment-era and industrial revolution-era notions of progress. These ideas generally assume that within the great forward trajectory of progress there are more primitive and more advanced entities. The result of this, Gould and others argue, is that we see ourselves as the exceptional and apex products of the eons' worth of ancestors which have preceded us. Ironically, the much-parodied illustration the "March of Progress" likely served to reinforce this notion through its powerful visual effect, while the article with which the illustration was published in Time Magazine actually attempted a more nuanced, scientific treatment of the subject.
All this is to say: so it is with the bryophytes. For a long time, bryophytes were regarded as relictual holdovers from the Devonian period, eking out an existence in lacunae left by their more advanced vascular descendants. This line of thinking, which naturally leads to the idea that bryophytes are evolutionarily moribund, is now being contested with great vigor by current experts and researchers of the subject(6). The emerging consensus is that the bryophytes are a vibrant and dynamic set of organisms from an evolutionary perspective, and they are highly adapted and continuing to adapt to best fill the niche which context has provided them. An increase in complexity or the development of a vascular system, the thinking now goes, would actually be maladaptive for bryoflora as there is no evolutionary pressure for the bryophytes to do this. Put another way, moss does not dream of being a tree because trees already have the tree niche covered. Where there is still room to grow, evolve, and proliferate is in the moist cracks (hah!) between the larger plants, and so that is where evolution has placed bryophytes for the time being. 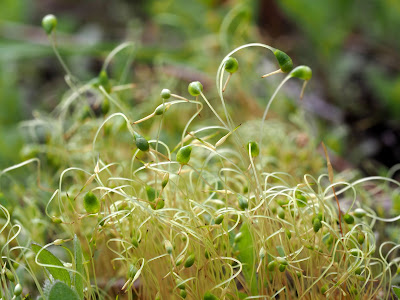 These sporophytes of an unidentified moss growing in Chatfield State Park do not dream of overthrowing the
the hegemony of vascular plants (the revolution will not be fertilized).

Thank you for reading about the fascinating world of bryophytes, or at the very least clicking through the pictures. Go forth now, and look upon mosses, liverworts, and mayhaps even hornworts with a close eye for detail and an appreciation for their complexity!