The nightshades (family Solanaceae) comprise a fairly small number of species in the Rocky Mountain Region. One guidebook I frequently use only cites three species(1), while this handy site(2) only offers five. I've chosen to look more closely at our native nightshades for this post because they tend to be distinctive-looking, have an interesting history of use by humans, and to have effects on other commercially important nightshade species(3). This post is not a comprehensive list of our local nightshades, but highlights some of the most salient ones I have encountered in the front range area.
While the nightshades do not make up a large percentage of locally occurring species, many of the most beloved garden plants we all use on a year-to-year basis are nightshades. These include potatoes, tomatoes, petunias, peppers, daturas, and tomatillos. Those which are not edible tend to be poisonous, and those which are edible often have poisonous look-alikes which grow in the wild. One of the most famous nightshades is the infamous Atropa belladonna, erstwhile known as deadly nightshade, which derives its name from the Italian "beautiful woman" (bella donna) in reference to the ability of the atropine contained in its leaves to dilate the pupils of women to fetching proportions(4).
The three species of nightshade which I have seen growing in the foothills region of Colorado are neither as deadly nor as useful as any of the aforementioned species, but they all have their own quirks which make them interesting in their own rights. 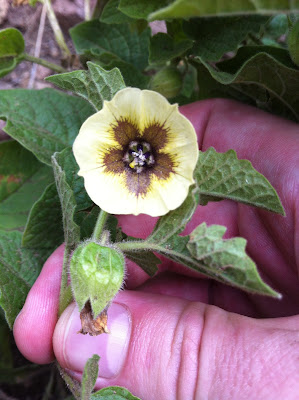 Henbane's name is difficult to pin down, etymologically. One source(5) published recently in the peer-reviewed literature cites a paper which intuitively states that it's name comes from the Anglo-Saxon for "hen murder," due to hens eating the seeds and suffering neurological symptoms and death. By contrast, Abram Smythe Palmer contended in his exquisitely named Folk Etymology, A Dictionary of Verbal Corruptions or Words Perverted in Form or Meaning, by False Derivation or Mistaken Analogy(6), that it is from the Anglo-Saxon henne-belle meaning "hen bell," possibly corrupted from "henge-belle," which actually means hanging bell. The second explanation is also plausible, as the calyx (see photo) does hang down in a bell-like fashion.
Whatever you call it, henbane is a common, rapidly spreading plant which is classified as a noxious weed in Colorado(7). It is exotic to our state, originating in Eurasia. It has pubescent stems and leaves. The leaves are also coarsely toothed with prominent veins, and reportedly emit a foul odor when damaged, although I have not noticed it. The flowers are yellow-brown with five darker brown or purple splotches more proximal to the center. I find it easy to pick out of a crowd while hiking as its gestalt  is immediately reminiscent of its domesticated cousins the tomatoes.

Henbane holds a host of physiologically active alkaloids which have a variety of effects on the body. These include scopolamine, which is the chemical that makes green potatoes poisonous to humans(8). It is not surprising then that most common experience resulting from consuming henbane is acute poisoning via anticholinergic action on the parasympathetic nervous system (9).
Henbane has a long and colorful use of medical uses for conditions as varied as sleeplessness, pain, and toothache cures(5). It was used (likely as a hallucinogen) by people attempting to practice witchcraft(5). It was also used as a poison for intrigues, and is conjectured to be the poison used to kill Hamlet's father(10). An much more thorough treatment of henbane through history can be found for free here.
Perhaps the most interesting use of henbane was in the brewing of gruits, beers which used herbs other than hops for flavoring(11). Henbane was used as a "flavoring," although the fact that it was psychoactive likely had a bearing on its use as well. Henbane fell out of favor as a beer flavoring with the institution of the Bavarian Purity Laws, although presumably clumsy brewing resulting in poisonings caused some caution prior to that. It is also worth noting that our very own in-state New Belgium Brewing has experimented with making a gruit, although presumably they skipped the H. niger in their recipe. 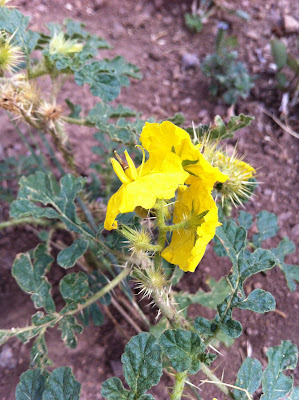 I have only encountered this interesting plant once on a hike, although to read the literature you would think it is spreading over the West and much of the rest of the world like a great, thorny, carpet. It is a highly invasive species which has found it's way to all continents except Antarctica, as well as New Zealand(12). Here in Colorado, as well as in the great plains region and Mexico, it is actually a native species. It is believed to be most native to Mexico, where the species' greatest genetic diversity occurs. An impressively detailed report on the prevalence of S. rostratum as well as some other interesting information about the species may be found here.
The name rostratum means in Latin having a curved or hooked beak(13), possibly referring to either the stamens of the flowers or to the plant's copious thorns, which cover the stems and leaves. Other names include beaked nightshade, beaked sandbur, buffalo berry, buffalo bitter apple, buffalo bur, hedgehog bush, horned nightshade, horse nettle, Kansas thistle, pincushion nightshade, sandbur, and spiny nightshade(12). It has pinnatifid leaves and produces pentagonal yellow flowers with five partially-fused or fused petals. The flower produces two different types of stamen, a phenomenon known as heteranthy, and which may allow flowers to more effectively spread pollen for reproductive purposes when a pollinator species uses the pollen as food(14).

Like other nightshades, S. rostratum is host to a laundry list of substances, at least some of which are poisonous via cholinesterase inhibition(15). Apparently S. rostratum  is potent enough to kill piglets, but I have not been able to find any record of human poisoning. Presumably the plant's hostile demeanor has helped to keep hungry people at bay.
Also as with other nightshades, people have used S. rostratum as a medicine. Pre-Columbian people in Mexico used it as a treatment for hypertension(16). Interestingly, studies of rat aortas indicate that S. rostratum extracts can serve as a vasodilator, which supports the therapeutic effectiveness of this plant.
Probably the most interesting thing about S. rostratum is that it is the original host species for the Colorado potato beetle(17). The Spanish "explorers" helped to spread both S. rostratum and its accompanying beetle outside of their native ranges as they traveled through the Americas. Then came the widespread cultivation in America and abroad of the closely related domestic potato (Solanum tuberosum), which the potato beetle adapted to with ease. As international trade and travel became more prevalent, the Colorado potato beetle ascended from its humble beginnings as a pest on only S. rostratum to its current status as a global scourge on the potato industry. So prevalent and devastating was the spread of the beetle that the Warsaw Pact countries actually accused the Western powers of unleashing the beetle on them as a form of entomological warfare(18). While this is doubtful and likely more for propaganda than anything, it is interesting to think that a beetle adapted to eat only one spiny weed from Mexico has managed to cause so much damage. 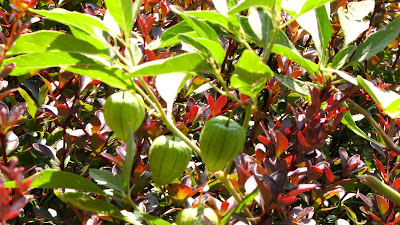 P. virginiana growing in a neighbor's yard.
It also inhabits more wild areas than the suburbs. Flowers (not pictured)
are white/beige and look similar to tomatillo or pepper flowers.

There is some debate within circles that debate this sort of thing on whether the species present in Colorado represent P. virginiana, P. longifolia, or both(19). Two of Colorado's botanical heavyweights, Weber & Wittman(20), consider the two species to be synonymous, so I will treat both as P. virginiana for the remainder of the post.
Plants in the genus Physalis are immediately recognizable by their unusual calyces, which envelope the small green fruits inside like a paper lantern. The tomatillo is one familiar variety of Physalis, as is the wild cape gooseberry. P. virginiana is not edible like those, although it could easily be mistaken for the latter. It could likewise be mistaken for virtually any of the numerous varieties of Physalis that grow in the United States, for that matter, as plants across the genus tend to be quite similar.
Fortunately, the other two varieties that grow in Colorado,,P. heterophylla and P. lobata, are easily distinguished by the presence of hairs on their stems and leaves, which P. virginiana lacks. P. virginiana sports lanceolate leaves which may have slightly dentate margins, glabrous stems which may have some purple pigmentation a branching points, and solitary (occasionally in small groups) yellow/beige flowers which are pendant on the stalk and which have a fused to semi-fused corolla of five petals(21). The plant's most striking feature is the papery, enveloping calyx occluding its ripening fruit (see pictures
below).

P. virginiana fruit as found on the plant (left) and with calyx removed (right).
The fruit turns a vibrant orange when ripe.

P virginiana is probably poisonous, but I have been unable to find any references to human or animal poisoning. However, I have found a report that a preparation of P. virginiana was used by some Native Americans as a treatment for eye infections, open wound dressings, and some stomach ailments(22). Researchers who applied an extract of P. virginiana to colonies of pathogenic bacteria found that it inhibited their growth.
I find the history of using plants as medicine no end of fascinating, especially in cases such as this where the plant actually proved to be physiologically active for the purpose it was used for. I imagine an inconceivably long process of trial and error to arrive at some of the plant-based remedies that native peoples use for medicine. The anthropologist Wade Davis notes in this TED talk (which I highly recommend) that native people he spoke to take a less systematic approach to these discoveries(23). He says that the people thought of the plants as "talking to them," and that they felt an almost mystical connection to the botanical world around them. At risk of sounding froofy, I would like to say that I still consider the native people's ultimate success in finding plants that worked for them a process of trying things out, but I do imagine that the social and emotional reality of being surrounded and grounded in your botanical environment is very different from what we experience in industrialized nations.
The economic significance of P. virginiana is limited, but it does serve two important roles. The first is that of a noxious weed, especially in warmer climates such as California where it is a perennial(21). The second is as a reservoir species for potato virus Y, a virus which can reduce yields or cause necrotic rot on potato plants(24). In other words, while it may be beautiful and interesting, P. virginiana is an unwelcome guest most places it chooses to grow.

This concludes my prickly and poisonous exploration of nightshades that grow in the front range. Stay tuned for more fun with flowers, fungus, and lichens (which do not alliterate).